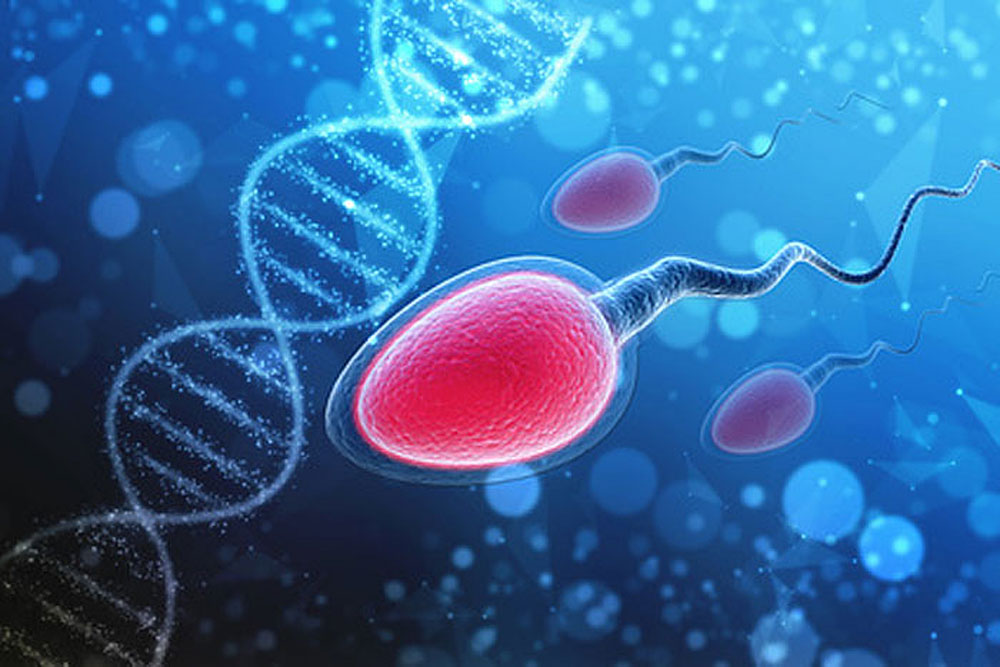 We often hear Semen referred to as "Sperm". But, the sperm cells (spermatozoa) are only about 5-10% of this fluid.

In that 5-10% there are normally 200-500 million sperm cells. Still, it takes only one sperm cell to fertilize a human egg.

Where
It Comes From

Sperm cells come only from the testicles. They take over 70 days to develop. As I said, they make up only 5-10% of the fluid.

Prostate fluid is obviously from the prostate gland. It makes up about 14-33%. It is a thin, milky, alkaline fluid. This fluid neutralizes the acidic fluid of the vagina and uterus. This neutralization protects the sperm cells and keeps them alive.

Pre-cum is made by the bulbourethral glands (also called: Cowper's glands). This, along with some fluids from the glands of the urethra, makes up about 2-5% of the total fluid. The pre-cum lubricates the urethra so the ejaculate can move easily through the penis.

It Has a Very Complex
Composition

Semen is composed of the sperm cells and seminal plasma. Plasma is defined as: "liquid that carries suspended solids."

Besides sperm cells and a large number of hormones, there are over 30 other substances in the seminal plasma including:


The amount of each substance varies according to personal body chemistry, health, and diet.

What a man eats greatly affects the composition and quality of his seminal fluid.

How Much
Does a Man Make?

Most men release about one teaspoon of fluid when ejaculating. Genetics play a major role in how much a man produces. And, how frequently he can ejaculate.

Quantity can also be influenced by other factors such as: The time period between ejaculations ( the longer the time, generally the larger the ejaculate). Arousal and foreplay (a longer time invested produces a larger ejaculate).

During arousal and foreplay all the reproductive glands are highly stimulated and produce fluids more rapidly.

What About
the
Color?

The color is generally a pearly white. But, it can also be grayish or yellowish to yellow.

If it is pink or red, that indicates blood in the semen. This can scare the hell out of you! But, it is usually no more serious than blood in mucous when you blow your nose.

It usually clears up by itself in a few days. If it is persistent, you should see a physician.

What Causes
the
Taste and Smell?

The taste and smell can vary a lot from man to man. It is affected by general health, medication, and often by what you eat.

For example: Eating asparagus is known to make it taste bad. Pineapple is known to give it a nice clean sweet taste!

Why Does It
Change?

The consistency of our fluid can vary from watery thin to thick and globby like jelly.

The consistency is usually uniform in younger males.

As a man ages he ejaculates less. Also, some of the enzymes that determine the consistency are not produced in as great a quantity. These things can cause the color to be yellowish and/or globby. It is not a serious condition. It is merely a sign of age.

With the exception of herpes and genital warts, STDs (sexually transmitted diseases) are carried in the fluid of our ejaculate.

Gonorrhea, syphilis, chlamydia, nongonococcal urethritis (NGU), Trichomoniasis, and cytomegalovirus (CMV) are all STDs that can all be transmitted through this sexual fluid. This is why a condom is so vital to use when the man's sexual history is at all uncertain.

This applies also to the horrible STDs like HIV, AIDS, and hepatitis. It is not the sperm cells that carry the HIV virus. The virus is in the seminal plasma as well as the pre-cum liquid.

If a male is HIV-positive, his semen may contain high levels of HIV, even if his blood levels show low or undetectable amounts of the virus.

This is just a great benefit of healthy sexual intercourse for a woman!

Semen contains many mood-altering hormones (which include: testosterone, luteinising hormone, oestrogen, follicle-stimulating hormone, prolactin and several different prostaglandins). Some these hormones can be detected in a women's blood within hours of exposure to semen.

Researchers have found that women, whose partners use condoms, do not experience the same sense of happy well being after intercourse as women whose vaginas are filled with semen. (Condoms, of course, are always recommended when the male's sexual history is at all uncertain.)

The study was done using the Beek Depression Inventory (a standard questionnaire for assessing mood).

The Researchers say they looked for other explanations such as use of oral contraceptives, frequency of sex, strength of relationships, and personality types.

They said none of these other factors can explain the findings!

Also, along the genetic line, researchers believe that the semen "high" increased the female's desire to seek out sexual intercourse with males.

That's the story of Semen!