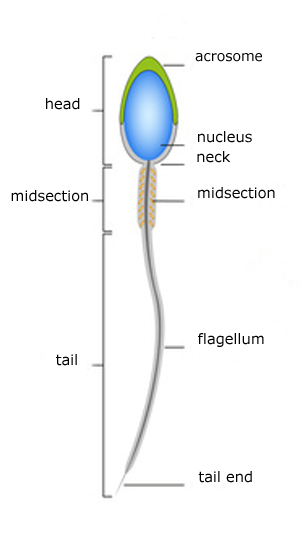 Sperm, is short for spermatozoon (plural: spermatozoa). It is the male reproductive cell. It is carried in the male ejaculate (semen).

A spermatozoon is about two thousandths of an inch long. There are about 200-500 million of them in a single ejaculation.

Unlike every cell of the male body, which has 46 chromosomes (in 23 pairs), these cells have only 23 (not in pairs). The same is true for the female eggs.

The sperm cell has a head a body and a tail.

The head contains the 23 chromosomes. The body contains mitochondria (which power the tail). And the tail is what enables it to swim up the females cervix and fallopian tube(s) to her egg. 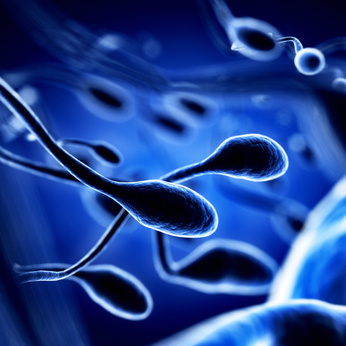 They swim about 8 inches in one hour. To do this they need to wave their tail about 16,000 times!

Not all of them come out alive or swim straight. But, if about half of them do, it is enough for fertilization.

When these cells zero in on an egg the tail movement becomes more forceful and erratic. This hyperactivity is necessary to break through the two physical barriers that protect the egg.

There are also certain protein molecules on the head of it that have a lock and key type action with a similar protein on the female egg. This prevents the sperm and egg of different species from getting together.

Sperm swim vigorously in the direction of various female hormones. This is what guides them to the egg. The attraction is called "Chemotaxis".

The chemotaxis attraction is extremely strong. In lab tests, even when the extract of these female hormones was diluted 100,000 times, the sperm still swam toward it!

Sperm swim in and are nourished in the semen. Once inside the fallopian tube(s) they have a life span of about 5 days.

This means they can be in the fallopian tube for 5 days in advance of ovulation and still fertilize the egg. The egg, unfertilized, has a life span of only about 24 hours.

In the vagina, they die in only a few hours.

In the open air, they die rapidly.

Women are born with a specific and limited quantity of eggs. Usually one to two million.

Baby boys are born with a set number of underdeveloped sperm cells which are not technically sperm, yet. These cells eventually mature at puberty and they will create the reproductive type cells.

Unlike the female human who uses up her eggs, a healthy male will create sperm his entire adult life from these underdeveloped cells.

The process is called spermatogenesis.

During spermatogenesis the underdeveloped cells make exact copies of themselves. Each cell will make four copies that will then mature into mature reproductive cells.

Spermatogenesis happens only in the seminiferous tubules within the testicles. 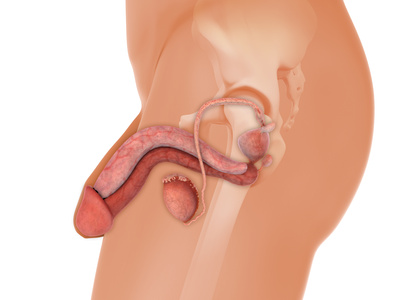 It takes 65-74 days for the sperm cells to develop.

The underdeveloped original cells do not become reproductive cells. They stay in the testicles and are saved for future "cloning".

If the original underdeveloped "parent" cells are killed or damaged, the man would become sterile because he would no longer have the resources necessary to create new sperm.

To develop, they need a temperature of about 3-5 degrees (Fahrenheit) below the rest of the body. That is why the testicles hang (in the scrotum) outside the body.

The scrotum has a built in thermostat. If the temperature is too cold, the scrotum will contract and bring the testicles closer to or even inside the body.

You have seen this if you've ever gone swimming in cold water.

When the testicles get warm, you will see the scrotum hanging.

If you keep the testicles too warm (from hot bathing or saunas, for example), you will kill the sperm and possibly become temporarily unfertile.

There Must Be Quantity

Although only one male cell will fertilize a female egg, one cell can not make it to the egg on it's own. That is why a man normally delivers 200-500 million of them per ejaculation.

By swimming together they move the semen toward the egg where about 200 will finally reach the egg.

Only one is allowed to penetrate the egg. Once it does, the egg hardens it's surface so that no more may penetrate.

Motility is Required for Pregnancy 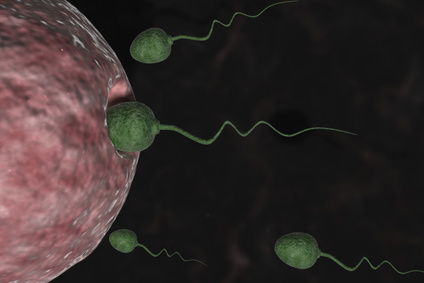 If they don't make it to the egg, there is no fertilization and no baby.

Motility (movement) can be effected by:

The male population in the USA has shown a large decrease in sperm count since the 1930s. Men today are producing only about half as much as we did just 70 years ago (ref: Environmental Health Perspectives, Vol. 101(2):65-71)

Pesticides, drugs and mineral poor soils seem to be the reasons.

The human reproductive system is highly vulnerable to pesticides. Men working in agricultural areas have shown more than ten times the incidence of infertility as compared to men in other occupations.

The Importance of Mineral Rich Foods

Even medical research is finally realizing the importance of trace minerals in maintaining the human immune system and all aspects of health.

The reason commercially grown foods are so low in trace minerals is that they are "fertilized" with only nitrogen, phosphorous and potassium and a selection of often less than 5-10 core minerals (instead of over 100 that occur naturally).

The plants grown this way eventually deplete the soil of necessary trace minerals. The plants get weak and are attacked by bugs. Then, pesticides are used to kill the bugs.

Those pesticides get on our food and into our food. The reproductive system suffers.

"Organic" farmers, on the other hand, often use fertilizers such as rock powders, marine by-product fertilizers (that naturally contain complete mineral content), and compost. Thereby constantly replenishing the soil with the entire array of trace minerals.

These plants are strong and hardy and require no pesticides to defend themselves from bugs.

Women over 35 have a higher risk of producing eggs with too many or too few chromosomes. This condition is called aneuploidy. These eggs produce babies with Down's Syndrome.

This same chromosome risk does not appear to happen with increased age in men.

The following will help cultivate high quality sperm that can easily impregnate a female egg:

For Healthy Sperm
Avoid These Things

That's the story on Sperm!