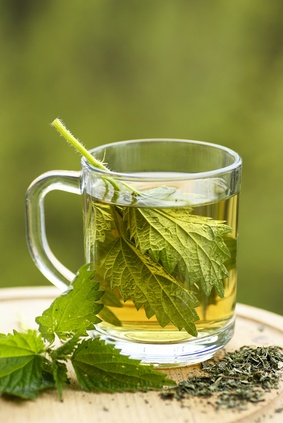 Stinging Nettle is actually a food. Like spinach! Generations ago it was considered a poor man's vegetable. It grows wild and it often considered a common weed. Just like the dandelion (which is one of the finest liver tonics in the world!).

This herb is still quite a popular food in rural farm areas where it grows quite freely. People continue to eat it as any other green vegetable because it is delicious!

You can eat the young leaves freshly picked. Once it starts to mature the protective little spines start to develop. Cooking totally softens and neutralizes the spines. You don't even know they were there!

The
Medicinal Properties
Were Only Discovered By Accident

Way back when, people mostly ate this herb because it was delicious. Those who ate it were mostly farmers or poor people who gathered their own wild vegetables to save money.

If you study herbal treatment history, however, you will find that:


Why did they used to eat it so much of it? First: it tastes really good. Second: it was easy to find!

If you live in the country, you can just go pick some. You should try it just for the pleasure of enjoying it! But, you're not likely to find it walking down a street in Los Angeles, California or New York City. So, we mostly get it in capsule form.

It is a comforting herb. It is an anti inflammatory.

"In clinical study,
it was found that Stinging Nettle
helps men

So, these men had less night time awakenings.

What About BPH
and
Stinging Nettle?

As a prostate treatment this herb has not been found to reverse BPH (Benign Prostatic Hyperplasia). It is simply used to provide more comfort. It has no known side effect when taken internally.

Medicinally the root is used in preference to the leaves. The reason is: most plants hold their chemical properties in greater concentration in the roots.

You normally do not have to buy Stinging Nettle separately. If you look, you can often find it in combination with Saw Palmetto and Pygeum in prostate supplement formulas. I include it in my own prostate health routine!